There were a couple of themes that reoccured throughout the evening that I thought could easily translate into your everyday life. And by everyday life, I mean those days that you get dressed in black tie for a wedding or a gala. In Houston, that really can be every day.

1. Statement necklaces are BACK! Not that they ever went away, but this year's Oscars saw some serious bling. I think part of the reason for the return of this jewelry classic is that so many of the necklines were open because the gowns were strapless or off-the-shoulder. For ladies that didn't wear a killer necklace, there was no shortage of bling in the form of large earrings and cocktail rings.

Florence Pugh Luis Vuitton drop necklace.
I'm not always one to get super excited about jewelry. It takes a lot for me to stop and notice jewelry sometimes, but this drop necklace is a stunner. Simple, elegant, modern. Perfect.

Zazie Beetz in a Bulgari diamond bib necklace with emeralds and matching earrings, on the Oscars red carpet.

Cynthia Erivo in diamond rings and earrings at the 2020 Oscars.

2. Pink ruled. There's no question that the blushiests of pinks won the carpet. Slightly more unexpected than the ever-popular black and white combo, baby pink could be seen on several A-list stars paired with dramatic black accents like Laura Dern. 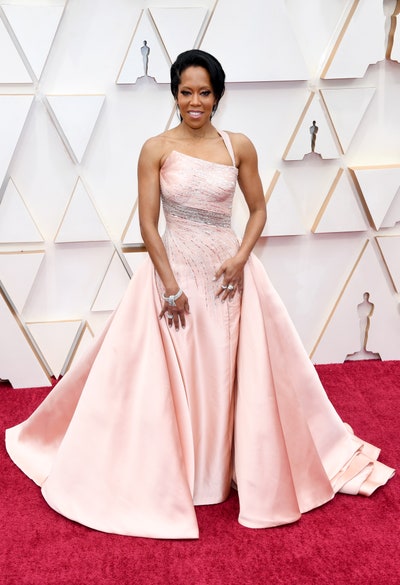 Regina King in Versace
This, to me, was absolute perfection. Flawless fit and stunning color. She also hit on trend #3 and took up space, as well she should. If I had to choose a favorite, this might be it, tied with Janelle Monae. I loved this look for Laura Dern. She looked like a winner and her dress was memorable without being trendy. 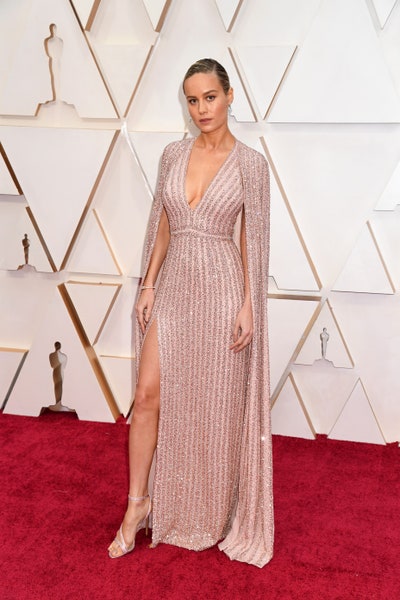 Can't argue with any of this. I can see any number of our clients being able to wear a similar style to a wedding or a gala. Classic with a healthy dose of drama. (Capes also had a moment this year too. See trend 4) 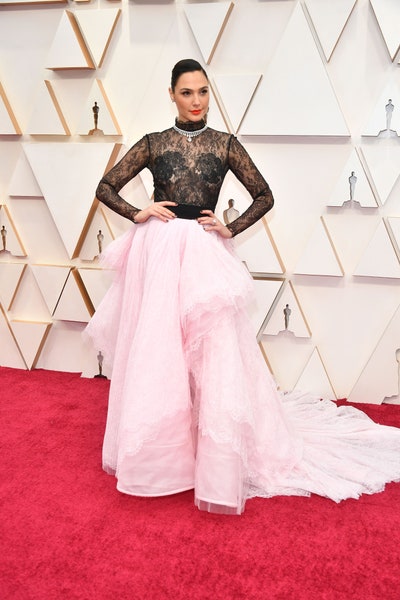 I'll admit that not every photo of this look was the best, but I thought it moved well on screen. It's also a perfect example of something I preach all the time. Evening separates are the best thing to have in your wardrobe. How easy would it be to switch out this skirt for something more neutral for a completely different look? 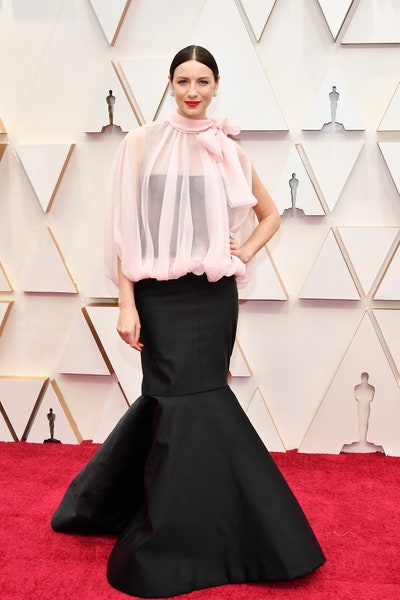 We recently made something very similar to this for a client. It's another way to think about evening separates. It's so easy to add a jacket or a blouse to a simple evening gown for a whole new look.

3. Space Invaders. Women claimed their space, literally. I've been thinking about the current trend towards large, statement-making gowns. Yes, they can be seen as a throwback to an earlier era where women were seen and not heard, but this current iteration of larger than life gowns seems to be saying something different. More women are finding and using their voice and they want to be seen. They are taking their space and having their voices heard and I think that's a beautiful thing for both women and fashion. 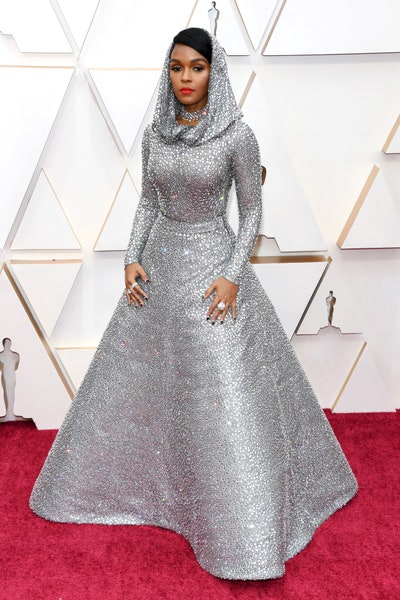 Between this and Regina's gown, I would say that the red carpet was a success. I loved the subtle Grace Jones reference. the amount of work that it took (over 600 hours to bead it) is mind-blowing! Janelle has such a presence that she can elevate even the simplest garment, but she really comes alive in this spectacular gown. 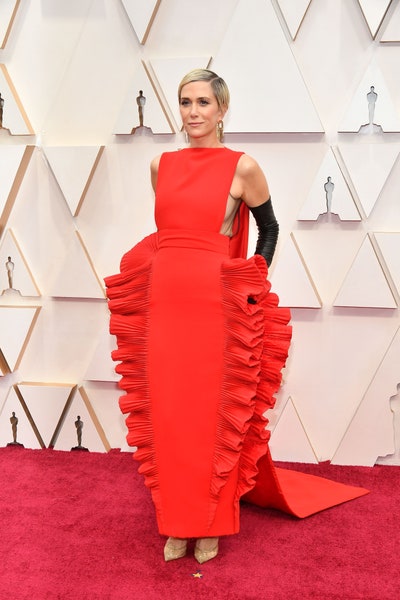 I know that this look isn't everyone's cup of tea (or plate of lasagna for that matter), but there is something to how confidently she wore this look that makes me respect it. Is it something I would suggest for every client? Probably not, but in this moment and on this wearer, it was unforgettable. And isn't that the point? Like it or not, you probably won't forget it. 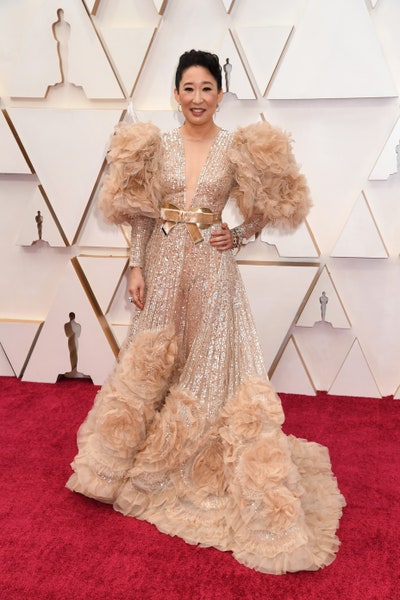 This is how you use fashion to make a statement and claim your place, at least at the fashion table. The Oscars have not traditionally been a place where a television actress (albeit on 2 hugely popular and acclaimed series) would be noticed, but here is Sandra Oh looking and being taken seriously for every inch (or foot of the sleeves) of the respected artist she is. 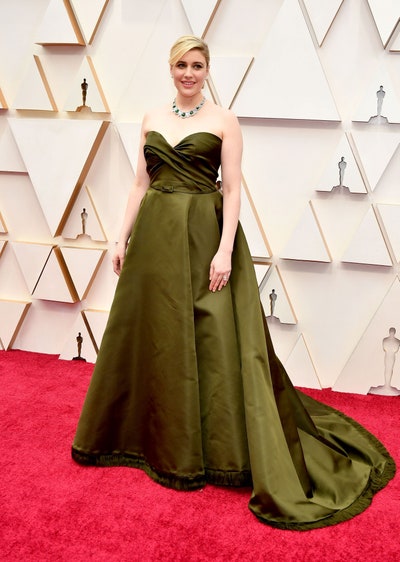 Let's get the obvious out of the way. Greta was snubbed by not even being nominated for directing "Little Women." What she did by restructuring the story without changing it was nothing sort of brilliant. I also unabashedly love this gown. It's not a color you often see on the red carpet and I actually like the slightly different shade of green in the emerald necklace. You can disagree, but I can see this gown, even in another color, looking spectacular on many body types.  There was a huge trend of structured double face or dutchess satin gowns on the red carpet, a trend that I've also noticed in our own work for clients lately. 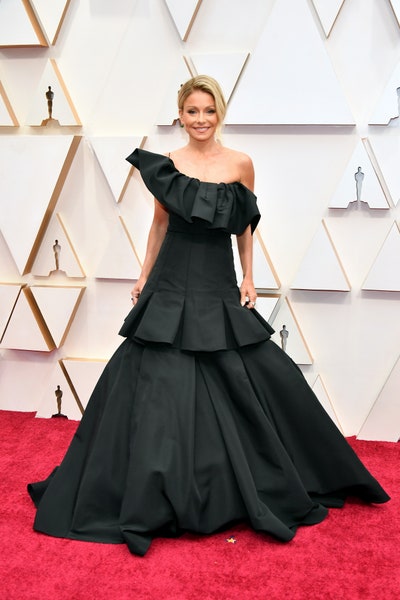 Although I'm not sold on the tiered skirt, the exuberant "crumb catcher" at the bust is fun. 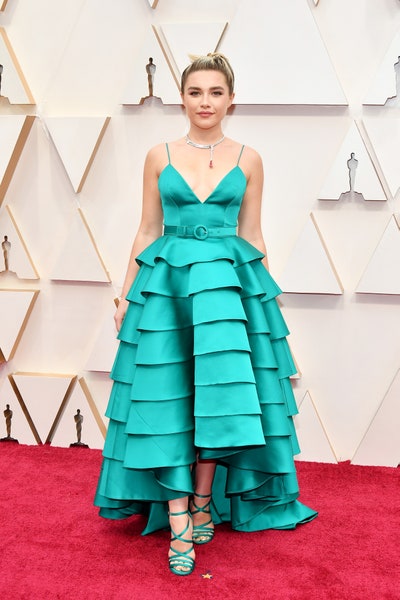 Another example of a large, structured satin skirt and a trend for dyed to match shoes. I preferred the gown she wore to the Vanity Fair Party, but that necklace! 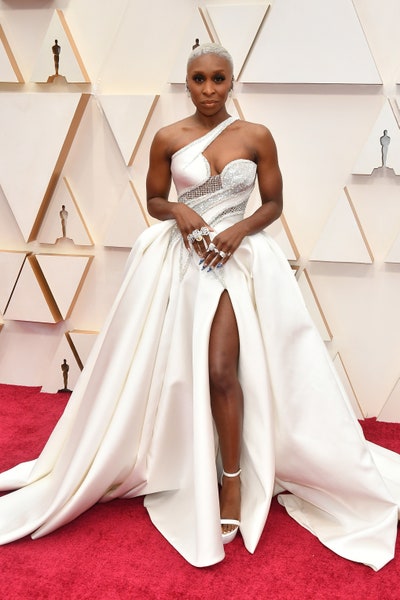 Cynthia Erivo in Valentino (both looks)

I'm convinced the Cynthia Erivo can wear just about anything just because she's Cynthia Erivo. I'm still not over seeing her in The Color Purple on Broadway and I thought she had the most powerful musical performance of the night. She is a STAR. She wore 2 space taking gowns Oscar night. Maybe to make up for the fact that more people of color weren't nominated? More power to her.

4. Capes. Maybe it's the prominence of women in superhero movies, but I'm a big favorite of the cape. We've even done them for brides. 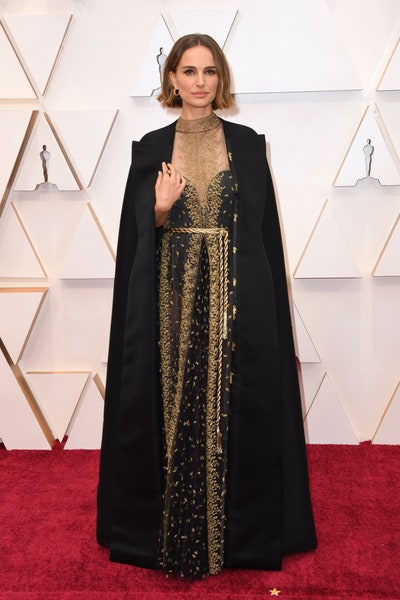 There were several great caped looks, including Brie Larson's above, but my favorite had to be Natalie Portman's Dior cape embroidered with the names of women who weren't recognized by the Academy for their directing work. 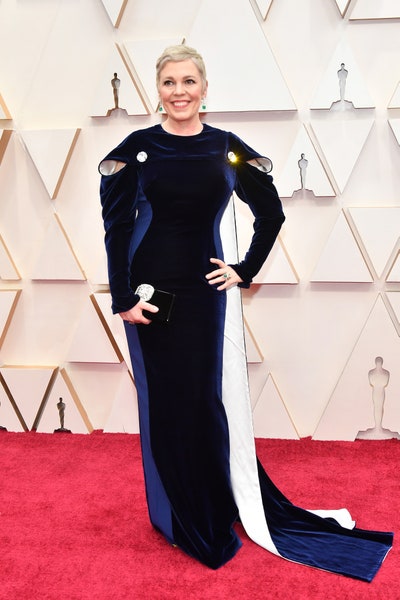 This is regal and just a bit quirky. Perfectly suited to the current head that wears The Crown. She looks confident. 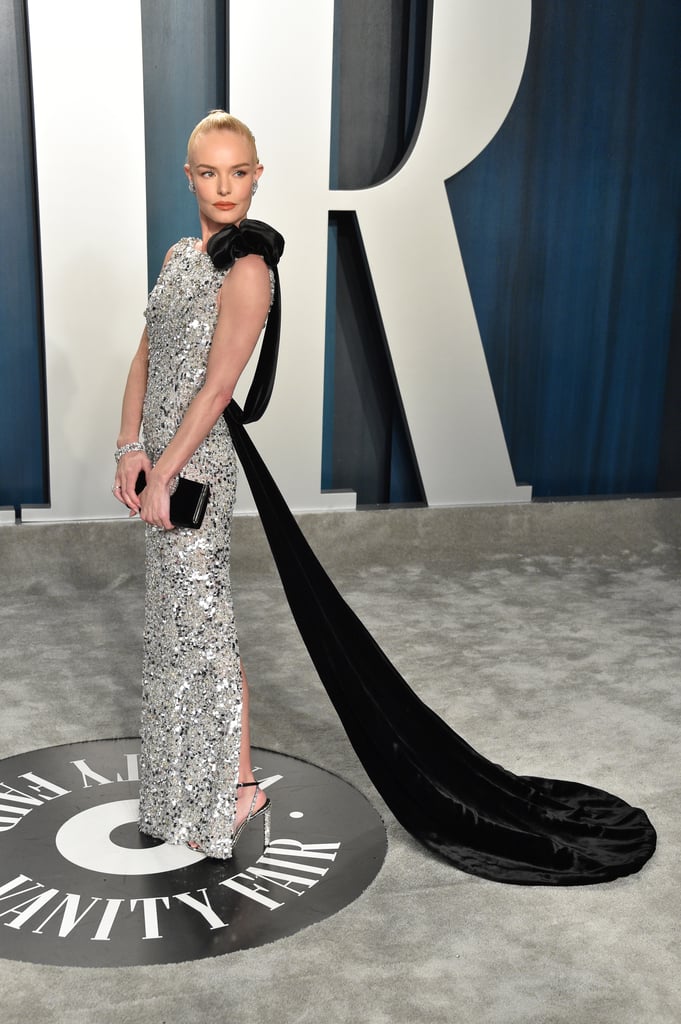 Kate Bosworth in Ralph and Russo

It's not quite a full cape but it is a fully stunning look. Kate Bosworth rarely disappoints.

The queen of Instagram also got on the Cape train.

My favorite Politician didn't come to play, looking every bit the star. This reminds me of something a movie star in the '30s would wear. 5. KISS. Keep it Simply Stunning. While many A-listers opted for over the top glamour, there were a few gowns that didn't need much to make a bold statement. 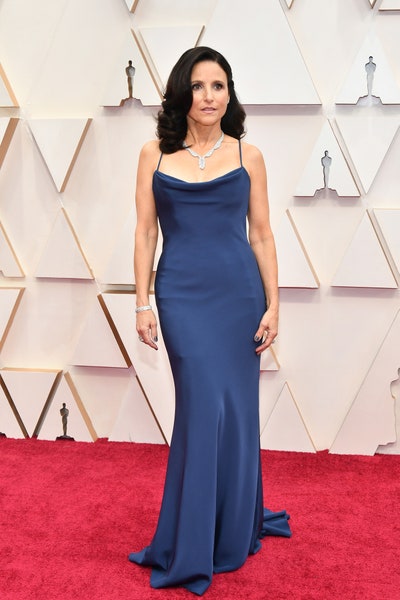 Julia Louis-Dreyfus in Vera Wang
This is a departure from her normal look and it's working. She kept the dress simple but pumped up the volume with trend #1.

Renée Zellweger in Armani Privé
﻿Our Houston (well, Katy) native did us proud in more ways than one. Renée is known for keeping things simple and unfussy, and while this gown is sleek, it's anything but forgettable. I have a feeling that this look will stand the test of time and become one of those gowns we all remember. Well done.
6. Draped to Perfection. There were so many gowns on the red carpet that had asymmetrically draped bodices that I had to narrow it down to a few that I thought did it super well. 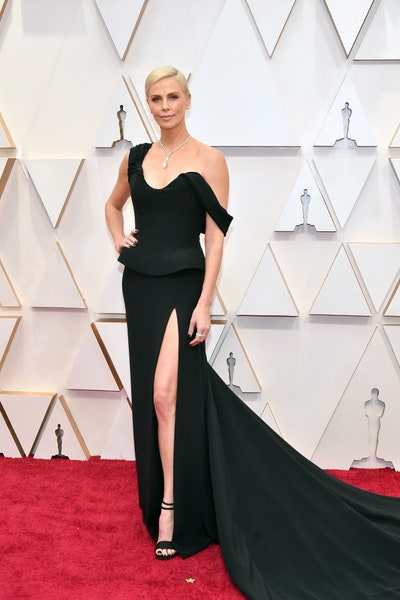 Charlize Theron in Dior Haute Couture and Tiffany & Co. Jewelry
﻿Even when she's wearing something that's slightly off-beat as she has for much or awards season this year, Charlize always looks great. She chose to go for a classic and timeless gown with a beautifully draped neckline topped by none other than a jaw-dropping diamond necklace. 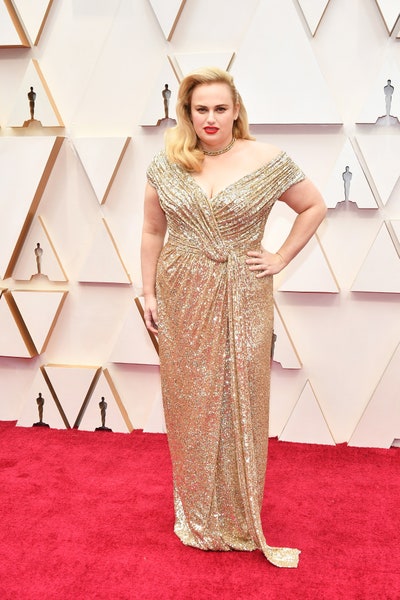 Rebel Wilson in Jason Wu
Rebel has really found what works for her and has been consistently showing up in gorgeous looks, but this one has to be a personal best for her. She looks like an Oscar in the best way. 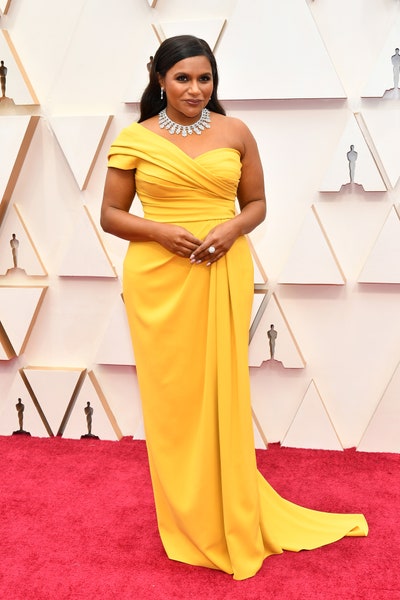 Mindy Kaling in Dolce & Gabbana and Chopard jewelry
﻿This is a perfect example of the right dress on the right woman with a perfect fit. She looks stunning. Not to take away from how great she looks, but I'm still surprised at how quickly Hollywood has returned to Dolce and Gabanna after their inexcusable racist rants last year. In no way am I a supporter of cancel culture and believe we can all learn from our mistakes, but they never even attempted to apologize. That's a hard pill for me to swallow. 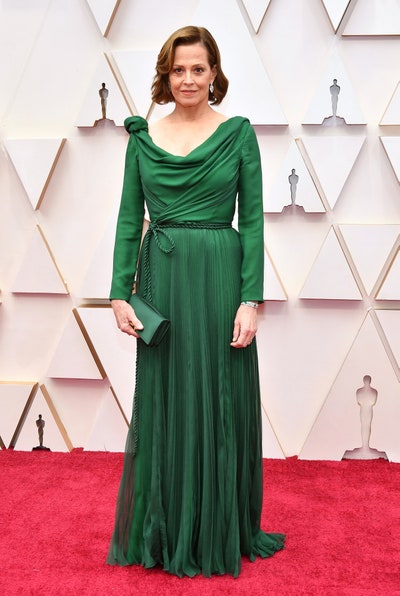 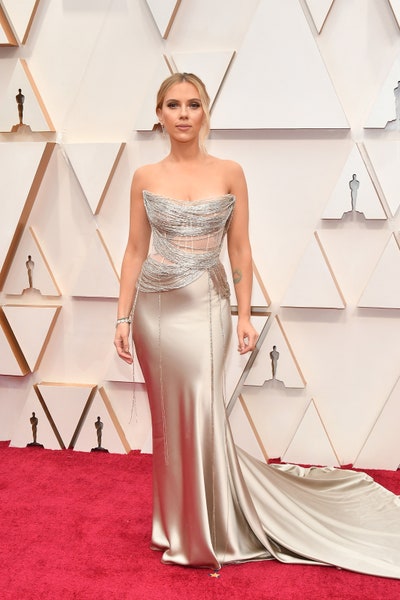 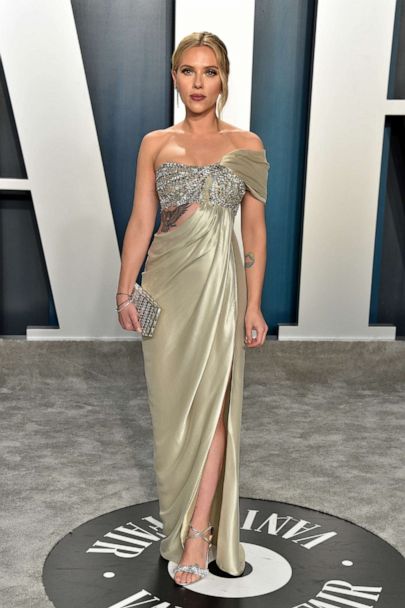 Scarlett Johansson in Oscar de la Renta (both looks)
ScarJo had a winning night even if she didn't take home a trophy. Both gowns are perfect for her and I love that her hair is softer that she normally wears it.
Red Carpet Watch

Loved most of these dresses, but for me, Mindy Kaling was the winner. I loved the color and the fit, and the design was perfect for heshape. I also love both Cynthia Erivo’s looks, and Charlize Theron as well. Regina King…. flawless!

Inside the Design Studio | Franceska McCaughan