Was it just me, or was that Oscars broadcast weird? It all started with the (very slow) red carpet. I felt terrible for the commentators on E! They had to keep vamping and figuring out what to say because there wasn't really much happening in the way of fashion for the first 3/4s of the broadcast. When the stars finally did arrive, there weren't that many to even discuss.

The ceremony itself started out with so much promise. That long tracking shot of Regina King walking through LA's Union Station was striking and dramatic, and I thought we were in for something magical. Unfortunately, besides some interesting camera work and thoughtful framing, the rest of the broadcast fell flat. I missed the movie clips that highlighted the work that was being honored by the Academy.
There were some charming speeches, and there was a pleasantly surprising amount of diversity in the nominations and wins. I'm still catching up on seeing all the nominated movies. While I watch a ton of TV, I haven't brought myself to watch many movies this year, which is unusual for me. 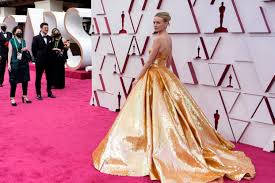 On to the fashion. Was it the best year for fashion? Maybe not, but there were some stunning looks that will probably inform what we'll be seeing in real life in the next year. 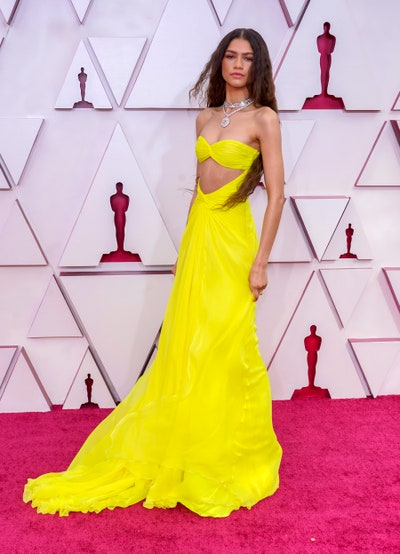 Abs-olutely Fabulous. Easily one of my favorite looks of the night. Zendaya rarely disappoints. Abs were one of the hottest accessories of the night. While I don't anticipate that we will be seeing abs on display at the next Opera Ball, I do think that we'll see brides putting their midsections out there for a rehearsal dinner look or reception outfit. 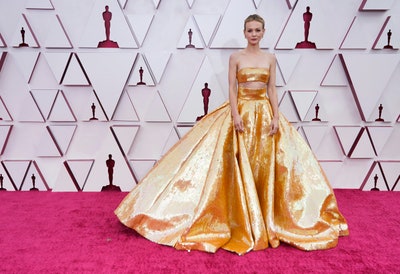 Abs-olutely Golden. This feels fun and worthy of the occasion. Big skirts were a huge (get it?) trend. I like how this one manages to have a sporty feel. 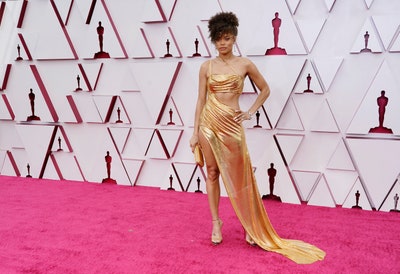 As with H.E.R., this look feels more Grammy Awards than Oscars. She doesn't look bad, but at the same time, it doesn't feel like it rises to the occasion. 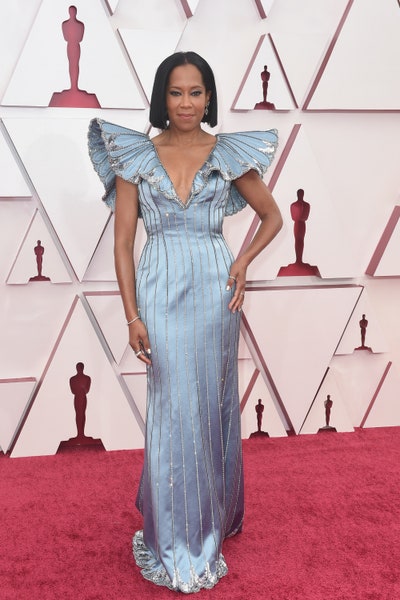 Another favorite. Regina really knows what works for her, and she knows how to work it. The color stood out among a sea of white, red, and gold.
I can easily see a version of this worn at a gala or for a mother at a wedding. Stately and exciting without being too over the top. Well done. 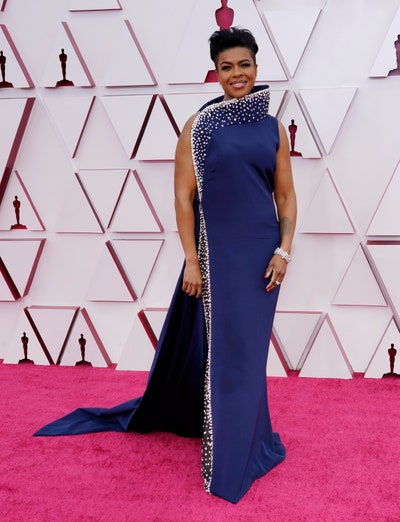 One of the most striking gowns of the night. I can't think of a better look to win your first Oscar, especially when you are the first person of color to win for best hair and makeup design. 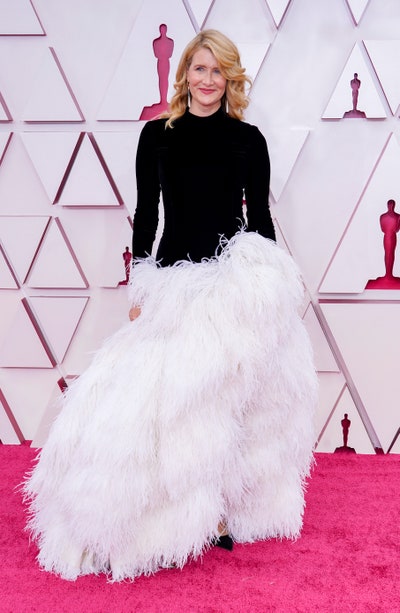 This was a winner for me. The juxtaposition of the severe, tailored top with the exuberant skirt was chic. I don't think this look is for everyone, but Laura Dern wore it with ease. The dress found the right lady to showcase it. 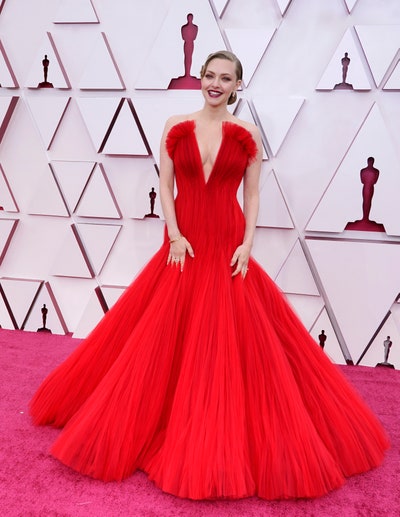 There were many plunging necklines on display, but this one definitely defied gravity (only appropriate since the talk of the town is that Amanda is gunning to play Glinda in the upcoming Wicked movie with Anna Kendrick as her Elphaba). This lovely gown in a beautiful shade of red illustrates yet another trend - big ball skirts. They are the perfect way to make sure that people keep social distancing! 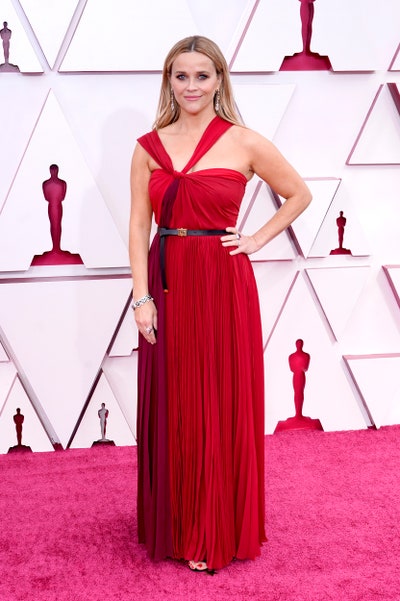 Another lady in red, Reese looks professional but isn't trying to steal the show. Gowns like this are perfect for a long night because they are easy to move in and work on a variety of body types. 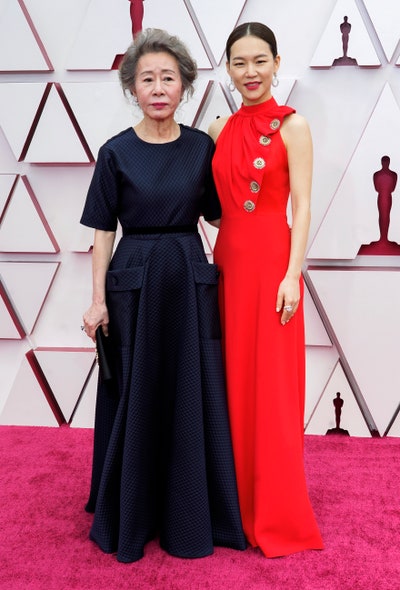 ﻿﻿Both of these gowns are real world gorgeous. They are effortless and timeless. I can imagine versions of these being worn to any number of black tie events. 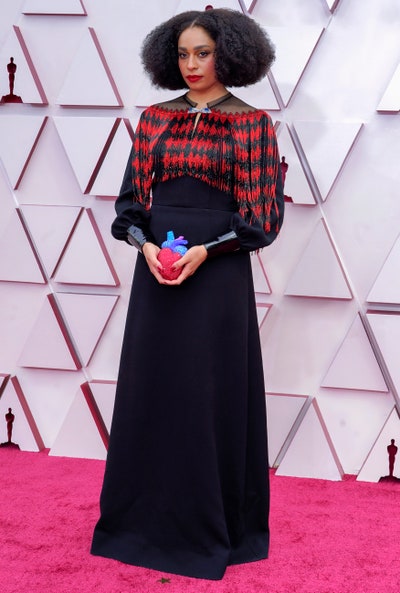 ﻿﻿Slightly off-beat, striking, and memorable. I'm into it. 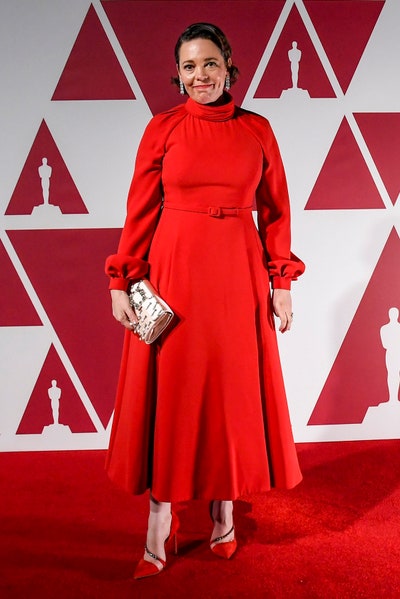 A lovely look, but I can't help but feel that this is more suited to a rehearsal dinner and not the wedding, if you know what I mean. It's not quite up to Oscar-level formality. 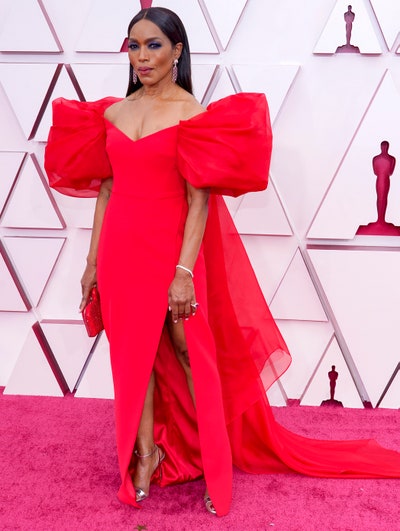 This, on the other hand, has the drama that the Oscars demand. Not many people can pull off this dramatic of a sleeve. The "lip" clutch was a bridge too far for me, though. 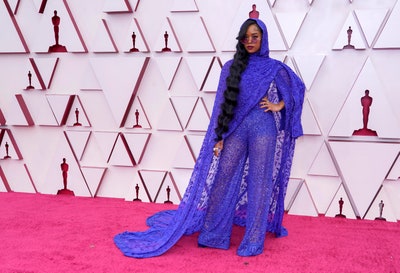 H.E.R. in Dundas and Chopard jewelry

One of the most dramatic looks of the night, this ensemble is something I would expect at the Grammy's. However, it's another case of the outfit finding the right wearer because when H.E.R. accepted her award for best song, she looked effortless and comfortable. 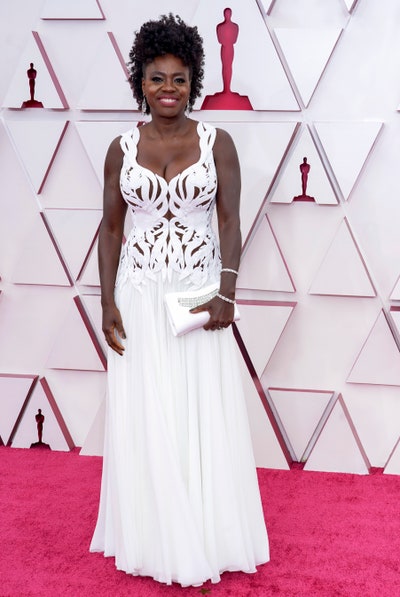 Viola Davis in Alexander McQueen with a Jimmy Choo clutch

White reigned on the red carpet last night. What's nice about this look is that it doesn't go bridal. It easy for a white gown to veer into wedding territory, and this one doesn't because of the graphic embroidery. 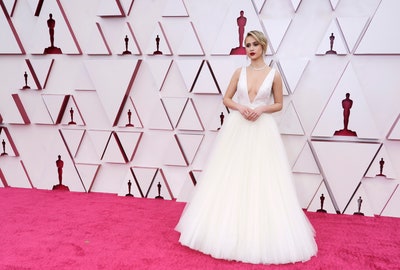 While I can't say that she looks bad, this feels a little generic and princess. There are ways to do this look, but it comes down to the details. The bodice isn't quite interesting enough to make this gown sing. 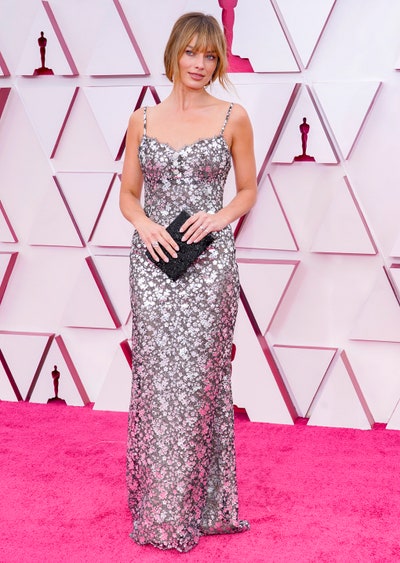 A lovely look that helped to underscore the theme of simplicity for the evening. I can easily see a version of this going to one of Houston's many galas and being perfectly appropriate. I especially love her hair and makeup with the dress. It feels fresh. 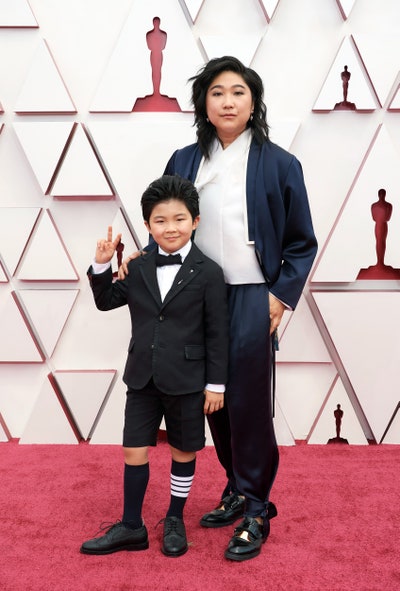 Adorable. I love the unexpectedness of it all. Emerald Fennell in Gucci
Let's hear it for the moms. She looks lovely. The perfect print for spring.