Spring is the time for growth and change. Nature is popping up all over, and our business is growing—all great things.
When I think of spring, I think of flowers, so it seemed fitting to ask the team what flowers were their favorite.
Did you know that there is more to flowers than just another pretty bloom? Flowers are full of symbolism and meaning. Different cultures worldwide have used flowers in decor and literature to represent everything from luck, wealth, and happiness to love, peace, and friendship.
There's more to petals than just "he loves me, he loves me not." Maybe your favorite flower says more about you that you know!

A Dahlia is a bushy, tuberous, herbaceous perennial plant native to Mexico and Central America. It's closely related to the sunflower, daisy, chrysanthemum, and zinnia.

Did you know the dahlia was declared the national flower of Mexico in 1963? Did you also know that they were grown as a food crop by the Aztecs? By the time of the Spanish Conquest, they had mostly stopped using them as food, and attempts were unsuccessful in introducing the tubers as a food crop in Europe. Officially the birth flower for August, some traditions recognize them as the November birth flower.

In general, these vivid summer flowers symbolize elegance, inner strength, change, creativity, and dignity,  but the meaning can change based on their color.

Dahlias still carry a few negative connotations, including betrayal, dishonesty, and instability.  You may have heard of the Black Dahlia murder mystery.

You'll often see white dahlias at weddings. During the Victorian era, they symbolized a lasting bond and lifelong commitment between two people.

These blooms are a commemoration of something new in the modern era, like joining a new religion or trying a new habit. They are often perceived as a symbol of diversity since their petals appear to fit perfectly into the whole head.

Tiger Lilly flowers are an herbaceous perennial that grows from bulbs that produce strappy leaves and long stalks yielding colorful, stately flowers in the summertime. You can plant the bulbs in the fall or spring and expect blooms by mid-to-late summer. The orange flower petals are recurved and are speckled with dark spots. 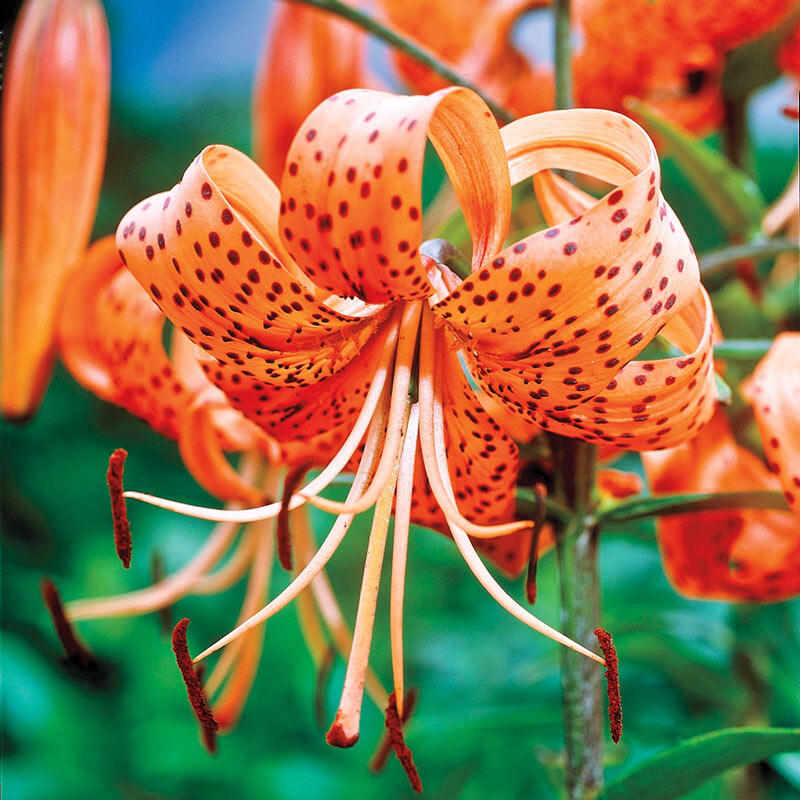 Tiger Lilies are a symbol of wealth, positivity, and pride. Tiger lilies have a unique look to them, and it’s most likely because they have spots on their petals. Tiger lilies come in different variations of orange hues, which makes them so vivacious!

These spotty lilies are associated with wealth and pride. Because of their vibrant colors, they can symbolize positivity and confidence.

Historically, lilies hold a reputation for being majestic flowers in ancient Greek mythology. It is believed that Zeus’ wife, Hera, is the creator of lily flowers. The drops of her milk that fell to the ground (after refusing to feed Hercules) were believed to be the first lily seeds!

Poppies are herbaceous annual, biennial or short-lived perennial plants and are often grown for their colorful flowers. The most famous color is red but they also com in a variety of stunning colors. They can be over 3 feet tall with flowers up to 6 inches across! Some species, like the opium poppy are illegal to grow in the U.S. The word "poppy" seems to have been derived from the Latin for milk, which the poppy's latex-like sap looks like. One poppy species is the source of the narcotic drug opium, which contains potent medicinal alkaloids such as morphine. It has been used since ancient times as an analgesic and narcotic medicinal and recreational drug.

Poppies have long been used as a symbol of sleep, peace, and death: sleep because the opium extracted from them is a sedative, and death because of the common blood-red color of the red poppy in particular. Poppies also symbolize imagination, messages delivered in dreams, beauty, success, luxury, extravagance.

In Greek and Roman myths, poppies were used as offerings to the dead and as emblems on tombstones to symbolize eternal sleep. Another interpretation of poppies in Classical mythology is that the bright scarlet color signifies a promise of resurrection after death.

Japanese and Chinese cultures view the poppy as a representation of passionate love in a couple. In England and Canada, red poppies are used on Remembrance day to honor fallen soldier.

Famously, in The Wonderful Wizard of Oz, a magical poppy field threatened to make Dorothy and her friends sleep forever.

Commonly grown in East Asia and known as yellow mai flower, the apricot blossom is considered the quintessential symbol of spring. In southern Vietnam, apricots are one of the first trees to flower during Tết. As a result, they are seen as the embodiment of the holiday spirit. 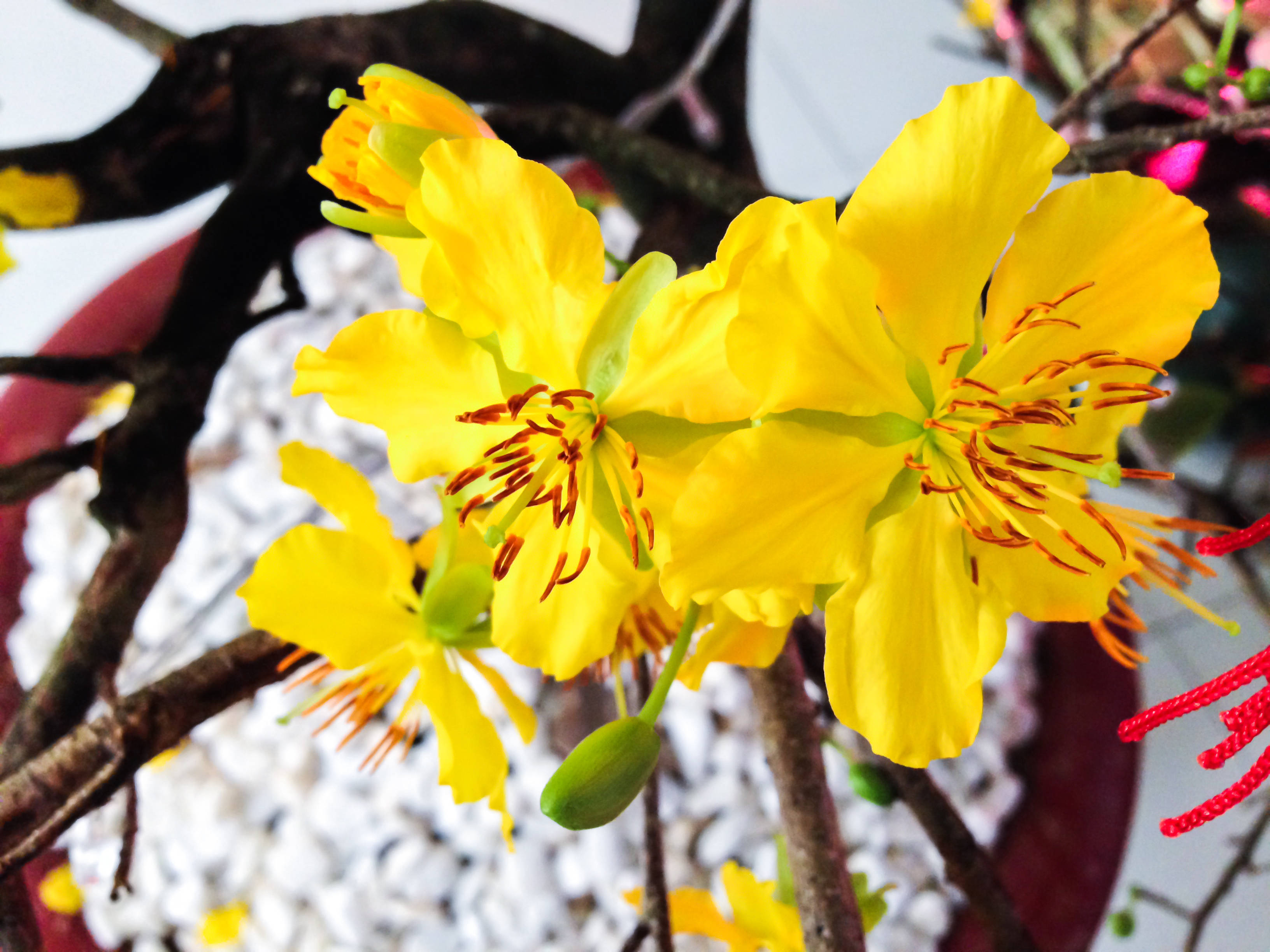 In Vietnam, the famous Hoa Mai represents the spirit of Tết. They obtain the yellow apricot flower from the tree which is cared for before the Lunar New Year. The tree appears with several buds that suddenly pop open during Tết. The blossom reveals bright yellow delicate petals which could be any number from five to eight. First, the yellow color is believed to represent wealth, hope, and  the noble roots of Vietnamese.  The Vietnamese people also say Hoa Mai brings good luck and wealth into the New Year. Five petals automatically signify five blessings which are peace, pleasure, longevity, convenience, and happiness. If your yellow apricot flower blooms with seven or eight petals, then you would be even luckier in the New Year. With that thought in mind, every family tries to obtain at least one Hoa Mai tree for their houses with the desire to step into the new year with much blessings. Most people buy the flower in pots when the season is near. They are placed within and outside the home to circulate good luck.